If you’re looking for unique Paris attractions, the Grand Museum of Perfume – Le Grand Musée du Parfum – is Paris’s newest and most fragrant museum. Here is everything you need to know for a sweet-smelling visit.

I had no idea perfume could be so deadly. Illuminated boards at the new Grand (or Great) Museum of Perfume, Le Grand Musée du Parfum, on swanky rue du Faubourg St Honoré in Paris, are revealing some tantalizing whiffs of history, like the story of Catherine de’ Medici who came to France to marry the future French king, Henri II, in 1533.

Not only did this Florentine noblewoman import citrus scents, the practice of steeping accessories in perfumed water and wearing scented gloves to the French court, she brought along some shadowy palace intrigue. The result? Her personal perfumer, René le Florentin, was accused of infusing bags and gloves with poison. To this day, rumours that Catherine de’ Medici used poisoned gloves to kill the mother of her daughter-in-law to be, Jeanne d’Albret, persist.

On that decidedly non-floral note, I continue through the lower level of Paris’s most ambitious perfume museum where pop art portraits of the likes of Cleopatra, Elizabeth Taylor and Marie Antoinette stare out imperiously at visitors, as if ready to turn up their noses at anyone who remains unconvinced of the power of scent.

Why visit the the Grand Musée du Parfum?

Because it’s time to give your nose some love. In an increasingly computerized world, the sense of smell is one thing that has yet to be digitalized. We can travel virtually with images and sound, but smell, like the very act of breathing, has yet to be separated from real life – and the Grand Museum of Perfume is a rare chance to focus on this most underrated of all senses.

Until our laptops can release the sweet scents of geranium, bergamot or fresh cut grass with the click of a mouse, perfume will remain a ‘real’ rather than virtual pleasure, and one well worth plunging your nose into.

The strange and mysterious history of perfume

There are three levels to the new museum, but I linger in the lower level because of all the juicy historical gossip. One of the most salacious tales involves Louis XIV, the Sun King. This fabled French king who built Versailles was a perfume fanatic, embracing rich scents of musk, castoreum and civet (all the better to mask his courtiers’ lack of hygiene).

When his desperate – and desperately beautiful – lover, the Marquise de Montespan, realized she was losing his favour she turned to perfumes and love potions, her rooms swirling with the heavy scents of lilies, datura and tuberose. Eventually she was driven from court after being (falsely) accused of poisoning a rival – and using the strong perfumes to mask telltale scents of poison.

On olfactory overdose, Louis XIV would reject the overwhelming scents of his youth, in the end refusing any scent but orange blossom.

A new way of looking at perfume

I’ll never see (or smell) perfume the same way again, I think, heading to the next level of this 15,000-square-foot (1400-square-metre) Parisian mansion that once belonged to the Roederer champagne family and later became the Couture House of Christian Lacroix.

Even the entrance is a glam

A luxury experience in Paris

Situated in the chic 8th arrondissement of Paris across from the 5-star Le Bristol Hotel, Le Grand Musée du Parfum is the perfect accompaniment to a shopping excursion along the ritzy shops on Rue du Faubourg St Honoré. Newly opened for 2017, the museum will have a garden, greenhouse, café and – perhaps most importantly – a concept store where visitors can get interactive help in choosing an ideal perfume to take home as the ultimate French souvenir.

Where do you score?

I should become a fragrance connoisseur, I think, following my nose to an interactive display that resembles a laboratory experiment. Maybe even a perfumer. My ambitions are quickly crushed when the machine, puffing an undetectable scent at me, informs me I’m one of the 64% of North American women who can’t smell musk.

I’m a fragrance failure! I look around at the other visitors in the pale high-ceilinged room, narrowing my eyes at the sight of their superior noses. Then I realize I haven’t turned the machine on correctly. Flexing my olfactory musk-les, I’m relieved to find I can smell musk. In fact, it’s practically overwhelming. Perhaps, like Louis XIV, I’ll have to turn to orange blossom.

(And while I don’t do so well with pheromones, I console myself with the fact that 75% of the population can’t smell them either.) 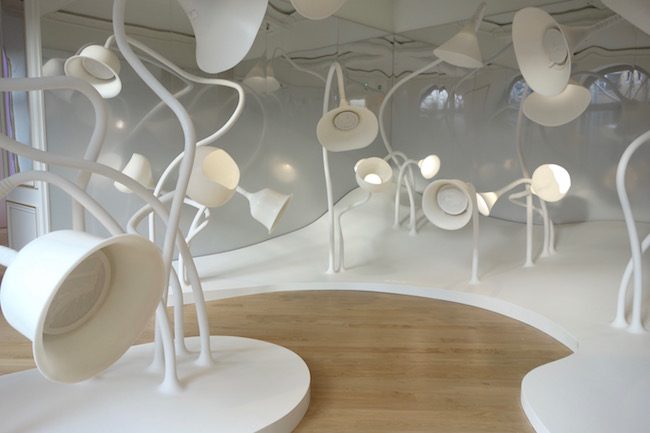 The Garden of Scents

What can you do at the Grand Museum of Perfume in Paris?

Plenty. This new attraction in Paris is one of exploration, aiming to be “a world of sensory experience, emotion, and enjoyment.” In addition to a section on the history of perfume, there is a section devoted to the art of the perfumer (Le Nez), a sound and light installation and a number of fragrant interactive activities.

The most entertaining is the postmodern-looking ‘Garden of Scents’, where white metal flowers diffuse both expected and unexpected fragrances such as cinnamon and smoke. 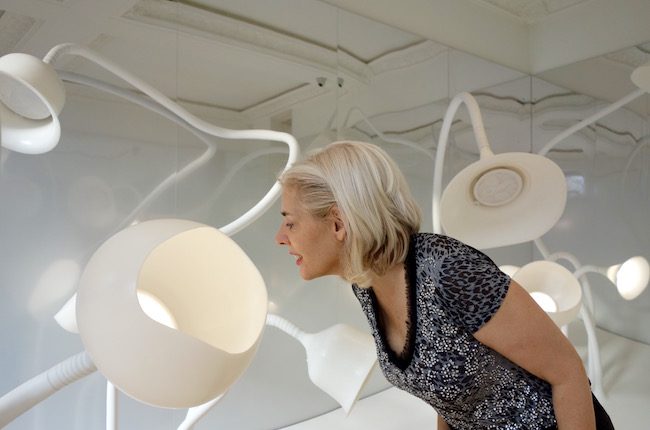 Indulging the senses in the Garden of Scents

The art of the smell

The Garden makes me consider my own ‘diary’ of scents. Is there anything that evokes memories as strongly as smell? Woodsmoke transports me to a cabin in northern Saskatchewan, while the smell of garbage and incense (an aroma that strangely appeals to me) carries me instantly to the exotic backstreets of Delhi. Pine takes me to the Rocky Mountains and practically purifies my soul with its feeling of freshness and clean air.

Fragrance and the art of seduction

If scent has the power to transport, it also has the power to seduce. Legendary lover Casanova considered scent an essential tool in the art of love, using rose oil on his handkerchiefs, iris powder and clove in his hair and amber and vanilla in his chocolates.

As I stop to inhale the scent from a bowl of pastel-tinted roses, I think of Marie Antoinette. The queen of flowery scents, she adored rose, royal lily, iris and violet. She also commissioned the court perfumer, Jean-Louis Fargeon, to create perfumes based on places close to her heart, such as her beloved Trianon Palace at Versailles and her childhood home in Vienna.

I could do the same, I think eagerly, inspired by a room full of hanging bronze ‘scent spheres’ that represent a perfumer’s palette. I could recreate my ‘memory scents’ of India, northern Canada and the Rockies …. although now that I think of it I’m not sure a garbage-and-incense-based scent with top notes of pine and campfire would work.

Picturing this barrage of clashing odours, I decide to leave the creative work to the master perfumers, and settle for a heady trip through the new perfume museum of Paris instead.

Travel tips for visiting the Grand Museum of Perfume in Paris

The Fragonard Museum of Perfume, opened in 2015, is near the Opera Garnier. (Read about my Fragonard experience in Grasse, France.) Spending some time in Paris? Try this for a one-day Paris itinerary.

Hours for the Grand Museum of Perfume

The perfume museum is open Tuesday to Sunday from 10:30 a.m. to 7 p.m. and on Fridays until 10 p.m. Last entry is one hour before closing. It’s also open on holidays (Mondays included).

How do you get to the Grand Museum of Perfume?

The nearest metro stations are Miromesnil or Saint Philippe du Roule. Rue St.-Honoré, which turns into Rue du Faubourg Saint Honoré, is a great street to stroll along with its high-end shopping, so I recommend walking if possible.

Price for the Grand Museum of Perfume