Luxury travel blog » Places » Europe » Wales » Is it a mystical experience or is that the sun in my eyes?

On my last day in Wales our sparkly red bus tour stops at St. Non’s Well and I’m hell-bent on finding some potent Celtic/Catholic mysticism. Our group troops off to the spring, a small covered well said to have miraculous curative properties. Nearby are the remains of St Non’s chapel built in the 6th century. Non was the mother of St David’s, patron saint of Wales, and her chapel, said to be built within an ancient stone circle, is the place where she gave birth during a raging storm. (Before it was a chapel, obviously.) I think I have that right. Then again, I wasn’t actually there 15 centuries ago, so I’m not an eye witness.

I trot over to a sign in the parking lot, convinced it will explain the mystical properties of the well. It says, turning area only. Of course some may read it as a no parking sign, but others who like to look at the bigger picture of life may chose to see its deeper meaning. Convinced my life will be henceforth turned around, I follow the steps down to the well. It’s a wonderfully atmospheric location on the coast, about two km from St Davids. 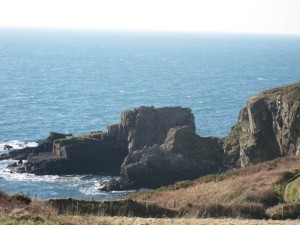 I would have liked to walk from the town. It would have been like a pilgrimage. But, on a press trip, one must make do with the time they get. The other writers were laughing and joking around. Daryl, a writer and photographer, dipped his hands in the well since he hurt them rock climbing a long time back. I’m not sure what the others were dipping and hoping to cure.

“Aren’t you going to go?” said Steven, my guide.

“I don’t like an audience for my mystical moments,” I said. And it’s true, it’s awkward trying to commune when other people are around, though I’m getting quite used to it after having had a healing with a shaman in the Amazon rainforest a couple of years back, with everyone’s camera flashes going off in my face while the shaman was invoking the spirit of the tigressa.

Wanting some privacy at the well I lured everyone away. I walked over to the remains of the chapel, and sure enough, people eventually followed. Then I speedwalked back and dipped my hands in the well. My ailment that I wanted cured is my weak throat. Some people have bad sinuses, or bronchial issues. Mine is my throat and it’s like living with a small fire-breathing dragon in my jaw.

But here was the dilemma: do I risk getting disease and bacteria, and possibly a throat infection or virus, by splashing possibly icky well water in my mouth in the hopes of a miraculous cure? I tell you I’ve had this dilemma more than once, especially in India where the priests are always wanting you to drink their holy water. I didn’t know how clean this well was, but then again, people have been curing their ailments here for centuries. Which again, is a little gross when you think about it. How long do their germs linger? I tested the waters, so to speak, by splashing water on my face. Nothing smote me down, so I splashed some on my lips and a drop or two went in my mouth. Good enough.

Igor, a photographer with our group came down the stairs and asked if I wanted him to take my picture. “Sure,” I said and gave him my camera.

After a few minutes everyone came back and went up the stairs. I wanted to stay at the well. Sometimes for me, that’s all the mysticism I need. My life seems to be all about wanting to move (especially during long boring dinner parties) and when a place says, stay here, just sit and be quiet, it’s my idea of bliss.

Back in the van I had the urge to look at the photos.

To drink or not to drink

There were a couple of faint golden circles in the water and on the wall of the well. And in the next picture they moved.

And there I was. Surrounded by a pale golden circle. Either I’m a ghost or I’d just had a mystical camera moment.

“It’s just the sun,” someone said when I showed it to her.

“It’s a rain drop on your lens,” said someone else.

Sure maybe. But how did the sun move that fast and how could there be rain when the sky was clear and blue? There are a million ways to rationalize the halo sun spot surrounding my head, and I’m sure you’re coming up with a few right now. I’m thinking them, too. Then again, maybe it’s St Non.

Did I feel myself surrounded by a spiritual floaty light? Well, uh, no. But I’m still going to enjoy my moment in the spotlight. And maybe even cure my sore throat.