Another film festival, another dumb blonde moment at TIFF. This, people, is my glittering life. And this is the Toronto International Film Festival. After my adventures at the Cannes Film Festival, in which 1) I had a gun pulled on me and 2) was asked to pose for a German magazine showcasing – and I quote – “fashionable OLDER PEOPLE,” I was ready for a smoother ride at TIFF by kicking things off at the annual ALLSTARS Party co-hosted by TIFF founder Bill Marshall and his lovely spouse, Sari Ruda.

The ALLSTARS TIFF party is everything you wouldn’t expect from a film festival party: laid back, low key and unpretentious. The venue was Barberian’s Steak House, a pedigreed Toronto restaurant with deep roots in TIFF, being the spot where Bill Marshall first mulled over the idea of starting a film festival in Toronto.

Barberian’s Steak House has an immense wine cellar, a downtown location on Elm Street, Canadiana treasures such as Group of Seven paintings and a warren of rooms ideal for discussing multimillion dollar film deals over a rare Porter House Steak.

It was in one of these dimly-lit rooms that I made my way through the crowd alongside writer Jacqueline Swartz while noting local celebs such as Liona Boyd and Toronto mayoral candidate, John Tory.

Being discreet myself, I barrelled over. “I couldn’t get into your movie at Cannes!”

The dark-haired man looked at me and blinked. “I’m not Atom Egoyan.”

Nooo! Backtrack, backtrack, I was thinking. I hadn’t mentioned Atom Egoyan by name. Would it sound better if I said, Oh, sorry. I mistook you for Kornel Mundruczo, the Hungarian film director? After all, Mundruczo’s dog’s-will-have-vengeance film, The White God, won the “Un Certain Regarde” prize at Cannes.

Or maybe Mathieu Amalric who directed La Chambre Bleue. You wouldn’t mind being mistaken for a French director, would you?

Instead, I came up with the tried and true, “OHMYGOD, I’m so embarrassed! She told me!” I paired this with an accusing finger pointed at the empty space Jacqueline had hastily vacated, following up with the ever effective. “So, what’s your name?”

1) Next time look carefully at the person you plan on talking to before storming over.

2) Don’t speak without thinking. Don’t speak at all. Ever again. Just attend MOVIES. Or, if people watching is essential, sit quietly in the corner of Shangri-La Toronto’s Lobby Lounge, which, I hear has become quite the TIFF hub.

Instead, I slunk away and found Jacqueline by the bar.

Jacqueline threw me a winning smile, and that’s when the TIFF party took on shades of a movie itself, Jacqueline wasn’t Jacqueline, she was one of those Jungian archetypes that keeps cropping up in films, the ones Christopher Vogler outlined in The Hero’s Journey (a narrative pattern now so pervasive in modern film it’s said to have destroyed Hollywood altogether).

Jacqueline, clearly, was the Trickster. A savvy character who, armed with a keen intellect and/or insider information, uses it to cause whimsical (and occasionally devastating) havoc.

“Look at it this way,” Jacqueline said. “It would make a great blog post.”

Really? I looked at her hopefully. Was redemption at hand? Maybe Jacqueline wasn’t the Trickster. Maybe she was the Mentor who helps the protagonist overcome obstacles as she or he sets out on a new path. Maybe this wasn’t TIFF humiliation … it was a plot twist!

Armed with a deeper understanding of myself now that I was on a new path, I felt bold enough to once again approach Man-Who-Must-Not-Be-Named-Due-To-My-Embarrassment. “I’ll probably write about this,” I said casually. “So Atom, if you wouldn’t mind answering …”

Arggghhh! I’d done it again! No! No! Jacqueline’s not the Trickster. The Trickster lies within! Or was I coming face to face with the Shadow, the dark side of one’s self? Is my Shadow a – gasp! – dumb blonde at TIFF? At this point I was 1) starting to hate Christopher Vogler and 2) to sweat.

“I’m sorry! I’m sorry.” I coughed the poor man’s name into my hand in case I was about to get it wrong again, and gamely struggled on. “Would you take a photo with me?”

Unsurprisingly, Man-Who-Must-Not-Be-Named did not look overly keen. He gestured to the man beside him and said, “Why don’t you take his photo? Do you know who he is?”

Why yes I do know who Gorden Pinsent is, thanks, I thought, feeling ever so slightly defensive because here’s the thing about being a (fake) blonde. You screw up once (okay, twice) and you’re labelled for life. It’s a burden as weighty as a truckload of rock-filled film reel tins.

But this is TIFF, I thought. I must remain fun and enthusiastic, like the beautiful Paloma Picasso-esque Millie Stanisic, a producer Sari had just introduced me to.

I should be feisty and flamboyant like Melleny Melody, a DJ and vocalist I’d met outside.

I wanted to sparkle like Sari herself, who charms everyone and has probably never mistaken anyone for Atom Egoyan – probably not even Atom Egoyan himself!

And maybe Man-Who-Must-Not-Be-Named was not just the  source of my humiliation but a Threshold Guardian, a figure who appears at critical junctions in The Hero’s Journey. Critical junctions that, if dealt with successfully, represent change and self growth. 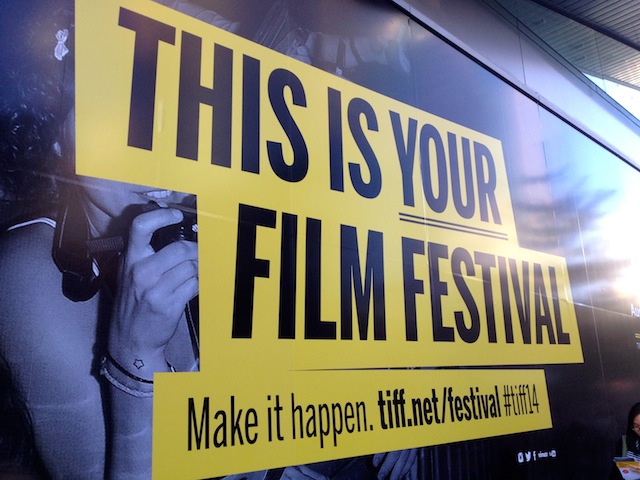 “Would you introduce me to Gordon Pinsent?” I asked him brightly.

Man-Who-Must-Not-Be-Named, being too decent to say ‘no,’ did introduce me. And suddenly I found myself talking to Gordon Pinsent, one of Canada’s most respected actors.

Words from the wise at TIFF

We talked about the festival and about Bill Marshal, Pinsent’s longtime friend, and here’s what he had to say, “I’ve known Bill since the beginning when things were starting to happen. People like him, who were intent on making the festival a reality, were the bravest people in the world. And because of Bill and because of the festival – he’s the reason a lot of us stayed here.”

Then Bill Marshall joined us and here’s what he said about TIFF, “This is the world cup of cinema. Enjoy it if you can.”

Thankfully I was now able to enjoy the party, now that my Hero’s Journey was almost complete (meaning the event was almost over). I was, however, still smarting from my painful dumb blonde moment at TIFF. Since I’ve known Bill for years I asked him, “Will you please tell that that guy I’m not a ditz?”

Gotta love Bill. He ignored me.

Sigh. I leaned against a wall. “You’re not going to tell him, are you?”

Oh, well. I’d met Gordon Pinsent and I’d celebrated TIFF. Plus, I had to admit, if I hadn’t been such a social disaster it wouldn’t have been nearly as exciting.

So here’s to a new Jungian archetype, Mr Vogler. The Bumbling Blonde who, deep down, possesses a searing awareness of the flaws and frailties of herself and others, and through example (ie a humiliating dumb blonde moment at TIFF), seeks uplifting change. Yes, that’s it.

As I made my way to the door, catching snippets of industry talk and film fest news, I suddenly realized I wasn’t the hero and this wasn’t my journey at all. The hero is TIFF and its journey from a small idea at Barberian’s Steak House in the 70s to its current status as one of the most important film festivals in the world.

The heroes are people like Bill Marshall who, as Gordon Pinsent said, were brave enough to get this film festival off the ground.

And now that I know I’m not even a bit player, The Hero’s Journey makes a much more riveting read.  So give me a drink and a fistful of movie tickets, and I will bumble on.

PS: Another Hero’s Journey has begun. Sari Ruda and Bill Marshall have launched NIFF, the Niagara Integrated Film Festival, and I look forward to having many awkward moments there in the future.

Read more: For more about travel to Canada: visit Things to do in Canada