Visit Aachen, Germany, one of Germany’s most historical cities. In addition to top sights like the catehdral it has an ancient tradition as a spa town, where both Charlamagne and Casanova came to cure

The potent spa water of Aachen, Germany’s most westerly city, is more healing than you can imagine. In the 18th century it was a top destination for people suffering from syphilis! The ‘cure’ lasted for months and consisted of spreading a toxic mercury-based cream on the body, and drinking 7 litres of water a day from Aachen’s sulphurous springs – the hottest springs north of the Alps. How’s that for taking wellness to the extreme? According to Werner, my German guide, it was so effective Casanova made use of it. More than once. 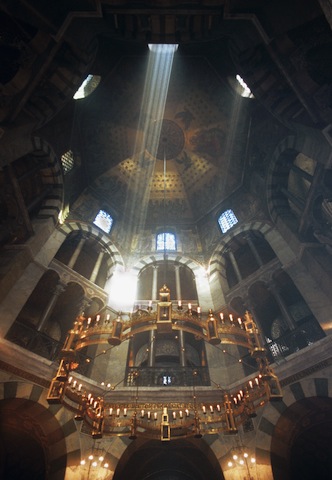 Visit Aachen today for its fountains

Today, Aachen, a bustling city of 258,000 located near the Dutch and Belgian borders has plenty of fountains, but there is only one where you can sample the thermal water – the classical Elisa Fountain in the centre of town. With the smell of sulphur wafting through the damp winter air, I fill a plastic cup. Salty, smelly and filling as soup, this is the full-bodied Bordeaux of thermal water, attracting the most discerning healing-water connoisseurs throughout the ages.

Visit Aachen of the past for Charlemagne

First came the Celts, then the Romans, then Aachen’s favourite resident, Charlemagne. This 8th century king and Holy Roman Emperor, known as the founding father of Germany and France, made Aachen the seat of his empire. And not because of its strategic location.

“It doesn’t even have a river,” says Werner. “Charlemagne had rheumatism and the healing water helped his condition.”

Today Aachen’s reputation as a curative spa has faded somewhat, but if you ask me, Charlemagne had the right idea. Curious to know more about this famed Carolingian king who – between protecting Christendom (beheading 4500 pagan Saxons in one day), unifying Europe and reviving the glories of Rome – also appreciated the benefits of a good hot soak and a scenic spa town, I follow Werner through the cobbled streets of the old town to Charlemagne’s greatest legacy, Aachen Cathedral.

Visit Aachen for its ancient Cathedral

I’ve seen a lot of churches but I’m not prepared for the weighty beauty of Aachen Cathedral. Modeled after a Byzantine basilica, it was Germany’s first UNESCO World Heritage Site. Its core, the original Palace Chapel, is an octagon with a massive mosque-like dome that, when built, was the largest dome north of the Alps. 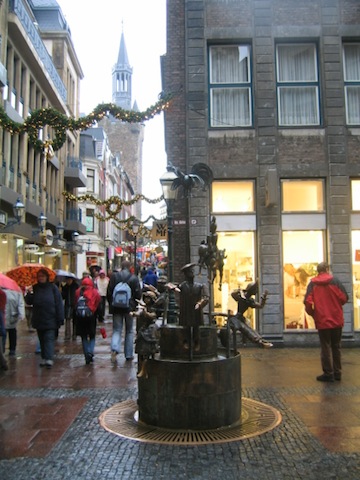 Inside, a 12th-century chandelier hangs down like a crown, a gift from the Emperor Barbarossa. Ancient Roman pillars ring the upper levels and golden mosaics glitter in the gloom. Standing on my toes, I look over heads into the roped-off gothic choir where two ornate shrines are drawing a crowd. One holds the remains of Charlemagne. The other contains four relics, so venerated that every 7 years when they are displayed draw thousands of pilgrims – a tradition unchanged since 1349.

He counts them off on his fingers. “Mary’s robe, the cloth for John the Baptist’s head, the loincloth and pampers of Jesus…No wait,” he says. “Pampers isn’t the right word in English.”

“The diapers of Jesus?”

So that’s what swaddling clothes are. 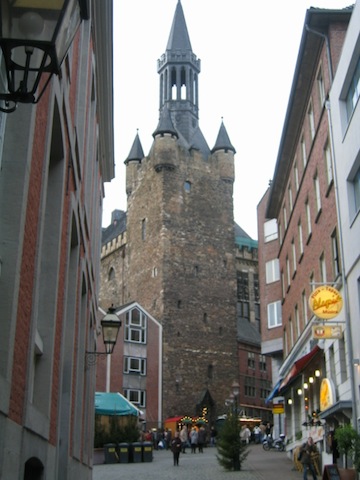 The next day, I visit the Cathedral Treasury down the street. Housing such blockbuster objects as the Cross of Lothair, the Bust of Charlemagne and the Persephone Sarcophagus, it’s considered the greatest ecclesiastical treasury north of the Alps.

Visit Aachen for its healing water

Afterwards, having immersed myself in the sights, I immerse myself in the famous water at the modern bath complex, the Carolus Thermen, built in 2001. It’s the one place where the public can soak in the thermal water.

The complex is contemporary and spacious, and while other bathers are no doubt pleased that the water has been deodorized and regulated to a pleasant 32ºC, I prefer my healing water stinking and scalding – thermal water as it’s meant to be. But the staff assures me that even if the water doesn’t smell foul, the healing properties that drew Casanova and Charlemagne are still there.

Visit Aachen, Germany, for the fastest pool north of the Alps

After a free water gymnastics class in an airy colonnaded hall, I paddle through a tunnel to an outdoor pool. Set in a rock grotto, with a waterfall splashing down, it’s tranquil and deserted. Suddenly a current starts up, fuelled by jets on the side of the pool. Without even kicking I start drifting around in a circle. The novelty of a turbo-charged swimming pool is irresistible and I sail around first on my back, then my stomach, then experiment with a half-standing zombie stance that lets me glide along dragging my feet on the ground.

By now other water revellers have ventured out. A small boy passes me, furiously doing the crawl, then I’m sideswiped by a laughing apologetic young couple. On the next go around, I aim for the exit, grasping at the wall to slow my pace. The current is too strong and I’m swept around again. The next time I’m prepared. I grip the wall hard and for a moment am in limbo fighting the current. An elderly man is sweeping up behind me, but at the last minute I swing myself into the tunnel, averting a rear end collision and breaking free from what is, surely, the fastest pool north of the Alps.

An easy and affordable way to visit Aachen is to sign up for a weekend package arranged by Aachen tourist service. The Bathing With All Senses Package includes accommodation, breakfast, welcome drink, entry to Carolus Thermen, the casino, and a self-guided tour brochure. Prices vary. For more information visit www.aachen.de or Tel: +49 241 180 29 51.

There are also clinics which offer spa cures, though the ‘spa cure’ webpage is in German only.